Mould sampling and investigation may be required for any of the following reasons but is rarely required or recommended when visible mould is present:

The occupants of this flat had building related illness. Building Forensics undertook a standard investigation and identified major construction and design defect.

Be careful what type of mould sampling you buy or are provided with. 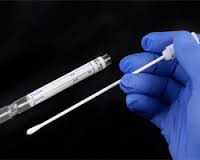 Photo 2 shows agar plates with different types of growth. Of course the cheapest sampling cost is for CFUs or colony forming units, but this information is useless. Who cares how many spores are growing, we need to know the genus and species. Next we have to be lucky if the spore will grow or be overgrown by faster growing moulds. Then you have to be lucky if the spore likes the gar you prepared because there are several types of agar specifically designed for different tasks. The most important issues is that dead and dormant mould and fragments of spore case and mycelia simply cant grow but they are the major health hazard, but you wont identify them here. 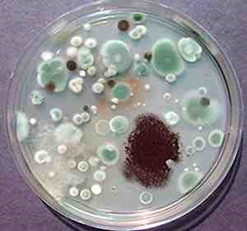 Photo 3 This equipment is used by many unqualified investigators in the UK. It provides a very pretty and believable report which has absolutely no recognised worth and doesn't comply with any recognisable standards. It provides a number which is absolutely worthless and interpreted as spore numbers but cannot distinguish between genus or species. The significance here is that a high naturally occurring mould could be relatively safe while low levels of toxic mould which is usually below detection levels in outside air could be extremely hazardous and get a green flag. The technicians that use and promote this service often state it was approved by Environmental Protection Agency (USA) but they never approved it although they did test the equipment  and stated it had limited qualitative use. Cannot provide useful information other than the presence of mould which is always naturally present anyway. The major use of mould sampling is to identify the species which often cause negative health impact, and I have seen countless Mycometer reports which give a green flag for low but extremely toxic mould cocktails

In this sampling protocol samples are collected in a specified manner and analysed. The result is an ERMI score. The ERMI score is the average spore and species calculated in 1000 homes in USA . While a breakthrough in assessing average home contamination, several flaws exist. The homes assessed were in USA and construction environmental differences exist, and even though it may produce a report which shows you at a lower than 25 % of affected homes, your personal exposure levels and immune response may be in the top 100%. 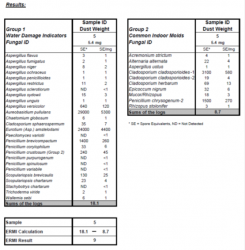 In this test samples are taken which can be used to assess the levels and presence of live, dead and dormant spores. This test can provide an indicator of mould presence especially when the growth is hidden. As with all sampling protocols this methodology has its drawbacks but is according to WHO a reasonable first step in assessing risk and hazard. Its importance is that it identifies both viable and non-viable spores both of which are health hazards which cannot be identified by culture based sampling. In the  table below three separate samples were analysed and this includes ambient which is used as a comparison for genus levels. In our basic survey we include  a minimum of 4 samples but accuracy is increased with sampling frequency

This lab report shows the lab analysis of samples taken and provides spore counts and speciation. This type of report is of great interest to the medical profession who can recognise the more toxic species and perhaps treat accordingly. The major benefit in this technology is that fragments, mycelia and all spores are identified and of course the fragments are the highest risk to health 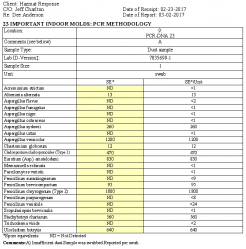 Apart from mould sampling there are many other tests to assess Indoor Air Quality (IAQ) and these include the following:

Once the type of sampling results are identified the protocol is chosen from the table below:

More information on the two most common types of mould sampling:

Culture type sampling a is known to provide very limited results as many spores may not carry in the air due to aerodynamics, they may not accept the culture media as a suitable growth food. Often the active growth of some moulds will overpower the slower growing moulds and therefore a complete range of some moulds may be missed. The World Health Organisation stated in 2009 that this type of sampling is generally unsuitable for investigation purposes, preferring total spores counts and PCR-DNA.

According to ACGIH, "differences that can detected with manageable sample sizes are likely to be in 10-fold multiplicative steps (e.g. 100 versus 1000)". Following this logic, if total fungal spores are ten (10) times greater in the sample from a suspect area than in the negative control sample collected from a non-suspect area, then that sample area may be a fungal amplification site.

Mycelium is a fungal mass that constitutes the vegetative or living body of a fungus. Following the same logic above, if total mycelial fragments are ten (10) times greater in the suspect sample than in the negative control, then the sample area is considered to be a fungal amplification site. The presence of mycelial fragments provides evidence of microbial growth.

Moulds can produce toxic substances called mycotoxins. More tha n 200 mycotoxins have been identified from common moulds, and many more remain to be identified. Some of the molds that are known to produce mycotoxins are commonly found in moisture-damaged buildings. Exposure pathways for mycotoxins can include inhalation, ingestion, or skin contact. Although some mycotoxins are well known to affect humans and have been shown to be responsible for human health effects, for many mycotoxins, little information is available, and in some cases research is ongoing. Some molds can produce several toxins, and some moulds produce mycotoxins only under certain environmental conditions. The presence of mould in a building does not necessarily mean that mycotoxins are present or that they are present in large quantities.

Certain authorities identify certain moulds whose presence indicates excessive moisture. The presence of a few spores of indicator mould should be interpreted with caution. Additionally, it should be recognized that these named moulds are not necessarily the only ones of potential significance. 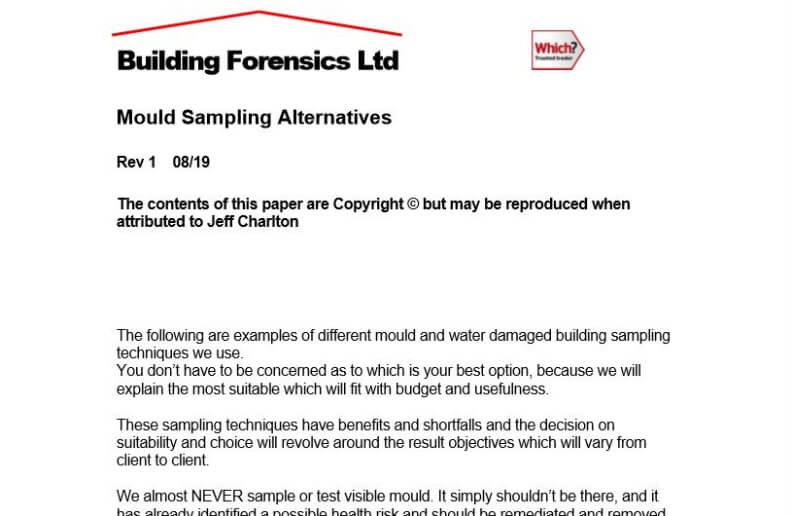