If you have suffered a flood event, you should be fully aware that as the visual water disappears (drying) it goes into the air and is carried usually upwards, to affect previously dry areas and materials. This is called secondary damage and is usually preventable.

Most significantly the spread and presence of water or moisture will amplify the ever present mould and bacteria and previously unaffected areas may develop mould growth. This is a particular risk to lofts and ceiling voids.

Biological amplification including mould usually prefers temperatures over 20c and relative humidity over 75% and low air movement such as in corners. Of course mould grows in refrigerators too so you can understand many variables exist.

Unfortunately the general requirements of drying wet properties and  evaporative drying may cause even greater bio amplification and increase the health hazard.

Typically contractors install dehumidifiers and air movers which cause evaporation and drying. Unfortunately this equipment has been in someone else's contaminated home before yours and is rarely if ever decontaminated. The equipment causes air movement and aerosolisation of surface dust and mould  which spreads contamination and increases the inhalation risk

Mould and most other contaminates can be removed by any competent contractor following recognised protocols. Unfortunately physical and more importantly economical decontamination of residual often chemically bonded or microscopic particulates cannot always be removed by cleaning. Sometimes odours and the possibly toxic chemical VOCs, SVOCs and secondary metabolites called mycotoxins remain and these can affect the health of building occupants especially tosentised or genetically prone people. The contamination present my be ingested inhaled or enter the body through skin contact.

While surface mould or bacteria is a concern from hand to mouth ingestion, the World Health Organisation state that inhalation of spores both viable and non-viable (live or dead) is the greatest health risk.

The removal of mould and bacteria from the air can take months or even years and require expensive equipment and even massive ventilation is unlikely to remove the risk. Fortunately new methods have been developed to reduce airborne contamination within hours . Contact us for details 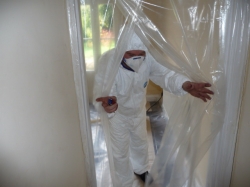 Typical controls to aid drying and prevent the spread of contamination

The British Standards on flood restoration and biological measurement have recognised the historic shortfalls in flood and fire damage restoration  and now require contractors to provide up front information on their methods of control and how they will prove to the client that their home is dry, clean and that the air is clean too.

But don t take their word, professional contractors who follow industry best practice (British Standards) should  obtain evidence of substantiation from an independent consultant such as Building Forensics. Independent verification is very important especially if flood victims are at high personal risk including the very young, over 65 and those on long term prescription drugs or undergoing any form of chemo or radio therapy

If contractors  cannot follow British Standards you should ask why not and how they propose  to  prove their method or proposals are better. Considering the British Standards were written by a panel of experts including Building Forensics, over two years and agreed by stakeholders such as the Environment Agency and Association of British Insurers, you might have good reason to be concerned.

You should be especially concerned if contractors sole method of sanitation is the application of a disinfectant as British standards and the World Health Organisation recognise dead mould and bacteria as contamination which can affect health even years after the flood event.

The uncontrolled escape of water or ingress through flooding can cause serious long term structural damage and affect occupant health.

It may be a surprise but it is well known that a flooded home generally wet for more than 3 days should only be entered wearing special breathing apparatus. This current advice was originally provided by the respected building research group CIRIA as far back as 2002. The advice was intended for builders and their employers who have a legal duty to protect workers from health risks under various legislation. This key advice was accepted and published with support of the Association British Insurers and Environment Agency but unfortunately employment legislation does not cover the homeowner or tenant.

When a building gets wet, the water will usually travel in liquid form both vertically, up and down and sideways. Where temperature or air movement creates drying through evaporation, the water will travel in all directions to cooler and dryer areas, following the laws of physics.

When drying is initiated the contamination and water vapour (humidity) will become airborne and travel to previously unaffected areas and pose a health threat or cause unnecessary secondary damage.

Although visual inspection is important damage can be hidden and emerge later. Any contractor should measure for all possible hazards or contamination and scope of damage but not all do and we provide your assurance that restoration will be or has been undertaken professionally.

Please contact us to see how we can help.